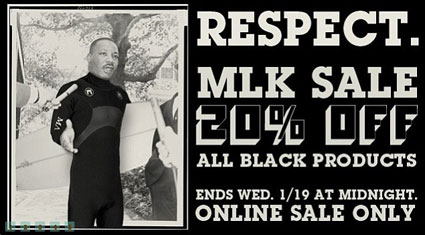 I had a conversation with a fellow advertiser and we veered into a discussion about the appropriateness of using the Dr. Martin Luther King Jr. National holiday as a catalyst for a sale or special.
Given the issues of equality that the civil rights icon fought, and ultimately died for, I am of the opinion that it is not only inappropriate, but offensive and crass.
While there is a prevalent belief among some that we now live in a “post-racial” society, nothing could be further from the truth.
In some respect, that is why I am opposed to using Dr. King’s name and or likeness as a convenient means of creating a sales or retail event.
This hasn’t prevented retailers, to varying degrees, like Sears, local car dealers or a surf shop in Laguna Beach from creating MLK “Sell-a-brations.”
This special holiday has also become an opportunity for satire.
Another friend commented when I asked her what she thought, “It has become a retail holiday, especially when big brands like Sears participate in the process.”
That may be true, but does that make it right?