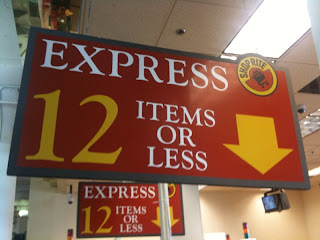 “The Dollar People” expect, demand and, have figured out how they will get more for their dollar…literally.Giving credit where it is due, I have to acknowledge two McDonald’s franchise owners for “introducing me” to The Dollar People.

Let’s start by answering the question, “Who Are the Dollar People?”

In the first example, we’ll use a McDonald’s Restaurant and a man named Paul.

Paul goes to a McDonald’s, orders a McDouble, Sweet Tea and small fries.

Several moments go by and Paul returns to the counter.

In his hand, a McDouble that is 3/4 eaten, yet he presents the sandwich at the front counter while swallowing one last bite and says,

The end result is that Paul got another sandwich…for free.

In this, yet another example, we’ll use a neighborhood Shop Rite and a woman named, Carol.

I went to the Shop Rite supermarket for three things.

What they were is not important.

I ended up with nine items and therefore figured the 12 items only express lane was my best bet.

In front of me, was Carol with a cart holding more than 12 items.

Note to self – This is going to take more than a few minutes.

Waiting to put her things on the belt, Carol was eating a bag of potato chips.

Prior to emptying her cart, Carol apparently decided she had enough chips.

After one last big mouthul, she brushed the excess crumbs off on her pants, neatly folded the chip bag, closing it and deposited it in the magazine rack between The Globe and People.

…the 25c per can discount she believed she was entitled to.

…and for the 15 cans of soda that were part of her order.

To add insult to injury, Carol ended up not having enough money and ultimately had to decide ‘which’ of the 47 she simply had to do without.

When it comes down to it, I suppose there is a little bit of the dollar people in all of us.

It may very well be as simple as different degrees of dollar people.

Haven’t you on more than one occassion, and with increasing frequency, reached a point where you expect and, in many instances, demand that you are not going to pay full price for anything
…unless you really, really have to?!

Have you argued a financial advantage/settlement over a minor infraction, and felt justified because (you felt and believed) you deserved the small victory?

It feels good to “beat the system”…and get away with it.

“If someone is going to come out on top today, don’t you think it oughta be me?”

Getting the most for your money is not only smart.

It is the unmistakeable sign of a savvy consumer.