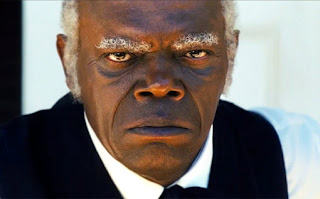 I took my dad to see Django Unchained.

As is the case with the majority of Tarantino’s work, I expected to be inundated with foul language and depictions of graphic violence.

However, I was in no way prepared to be blown away…by a single performance.

Samuel L. Jackson’s performance, as head house slave, “Stephen” (not Jamie Foxx, not Leonardo DiCaprio) is worth the price of admission.

Before “Stephen” opens his mouth, Jackson’s facial expressions and body language express an unctuousness that left an emotional wound on everyone in the audience.

This is the stuff that should garner nominations and awards.

My dad and I represent two generations of Black men.
We agreed that the character was offensive, but we also question why Jackson received so little recognition for such an outstanding performance.

Perhaps Frank Rich is correct in his assessment that Jackson’s performance was “so repellent and so politically incorrect” that it frightened people.

“Tarantino has cited a pulpy Hollywood movie of 1975, Mandingo, as a favorite. That film, which improbably cast an aged James Mason as a sadistic plantation owner, was widely dismissed as a racist exploitation movie at the time of its release. Looking at it now, you can see what captivated Tarantino: For all its camp dialogue, racial stereotypes (white and black), and soft-core miscegenation porn, it actually showed the rape and genocide that were usually bowdlerized or kept offscreen by mainstream American movies depicting slavery up until then. (The phenomenally popular ABC mini-series Roots, which in watered-down network fashion tried to remedy that failing, didn’t appear until 1977.) In Django Unchained, some of the most savage incidents in Mandingo are ratcheted up to an excruciating pitch, which may be what it takes to discomfort a contemporary film audience inured to violence. The scholar Henry Louis Gates Jr. believes that one scene, which literally puts the blood back into bloodhounds, is among the most “devastatingly effective” to be found “in any representation of the horrors of slavery.” That scene is unwatchable, which is the point.
And the bad guys of Django aren’t only whites. Candie’s head house slave, a demonic Uncle Tom, has been accurately described by Samuel L. Jackson, the actor who plays him, as “the most despicable black motherfucker in the history of the world.” He is so politically incorrect and so repellent that Jackson seems to have frightened away ­Oscar and Golden Globe voters alike from giving his profusely shaded characterization of abject villainy, an Iago refracted through centuries of African-American history, the recognition it deserves. There’s nothing like it in American movies.
To what point does Tarantino rub our noses in this hideous ancient history, you might ask? Slavery is long gone in America, and so are Stepin Fetchit, Jim Crow, and the heyday of the Ku Klux Klan (which makes a cameo prewar appearance in Django even though it didn’t emerge until Reconstruction). We have elected a black president, after all. African-American history is now a staple in every (well, almost every) school. Tarantino gave his own answer recently. “Doing history with a capital H keeps the movie at an arm’s distance, puts it under glass a little,” he said. “The whole idea of doing a movie like this was to take a rock and throw it through the glass.” By using every imaginative strategy he can, he aspires to jolt us into looking with fresh eyes at a past we assume we know. He departs wildly from the facts to make an audience face the harshest truths. It’s gutsy, and arguably arrogant, for a white man to attempt this, and I feel strongly that Tarantino pulled it off. As Lincoln portrays the politics we wish we had, so Django forces you to think about the unfinished business that keeps us from getting there just yet.”