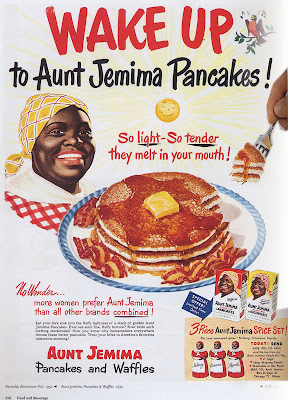 I’ve got this thing for Aunt Jemima.

Long before Oprah, Aunt Jemima was the first Black female icon to gain welcome entrance into homes across America, both Black and White.

I acknowledge and disavow the negative racial stereotypes associated with the early incarnations of Aunt Jemima.

Admittedly, my fascination has more to do with the power of the brand – Aunt Jemima empowered and inspired consumers, making them believe that they could capture “her special magic” simply by adding wet ingredients to a dry mix.

There are three Aunt Jemima print ads, circa 1943, on my kitchen wall.

They remind me, daily, that as advertisers, we have a responsibility to help craft responsible messages that are authentic, relevant, engaging and absent of offensive and derogatory stereotypes.

For additional reading on the subject, check out —

Slave in a Box: The Strange Career of Aunt Jemima by M.M. Manning

The Grace of Silence, A Memoir by Michele Norris, whose grandmother portrayed Aunt Jemima, selling pancake mix to midwest housewives