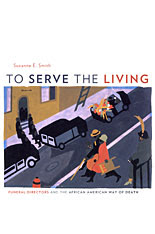 “To Serve the Living: Funeral Directors & the African American Way of Death” is not merely a book about the history of death.

It is much more.

It is a history of African-American entrepreneurship.

At its core, “To Serve the Living” is about African-American funeral directors.

They were pioneering entrepreneurs in a largely segregated trade, economically independent and not beholden to the local white power structure.

More importantly, their financial freedom gave them the ability to support the struggle for civil rights and to serve the living as well as bury the dead.

The financial and political clout of African-American funeral directors provided them with a stature that could coalesce the community on points of relevance ranging from voter registration to community empowerment. This is a testament to their resilience, fortitude and pioneering spirit in times when such qualities in African-Americans were challenged and often times resulted in bodily harm or death.

In a September 2011 C-Span interview, the book’s author Dr. Suzanne E. Smith points out the impact, viability and prominence of the African-American funeral director, from antebellum slavery to today